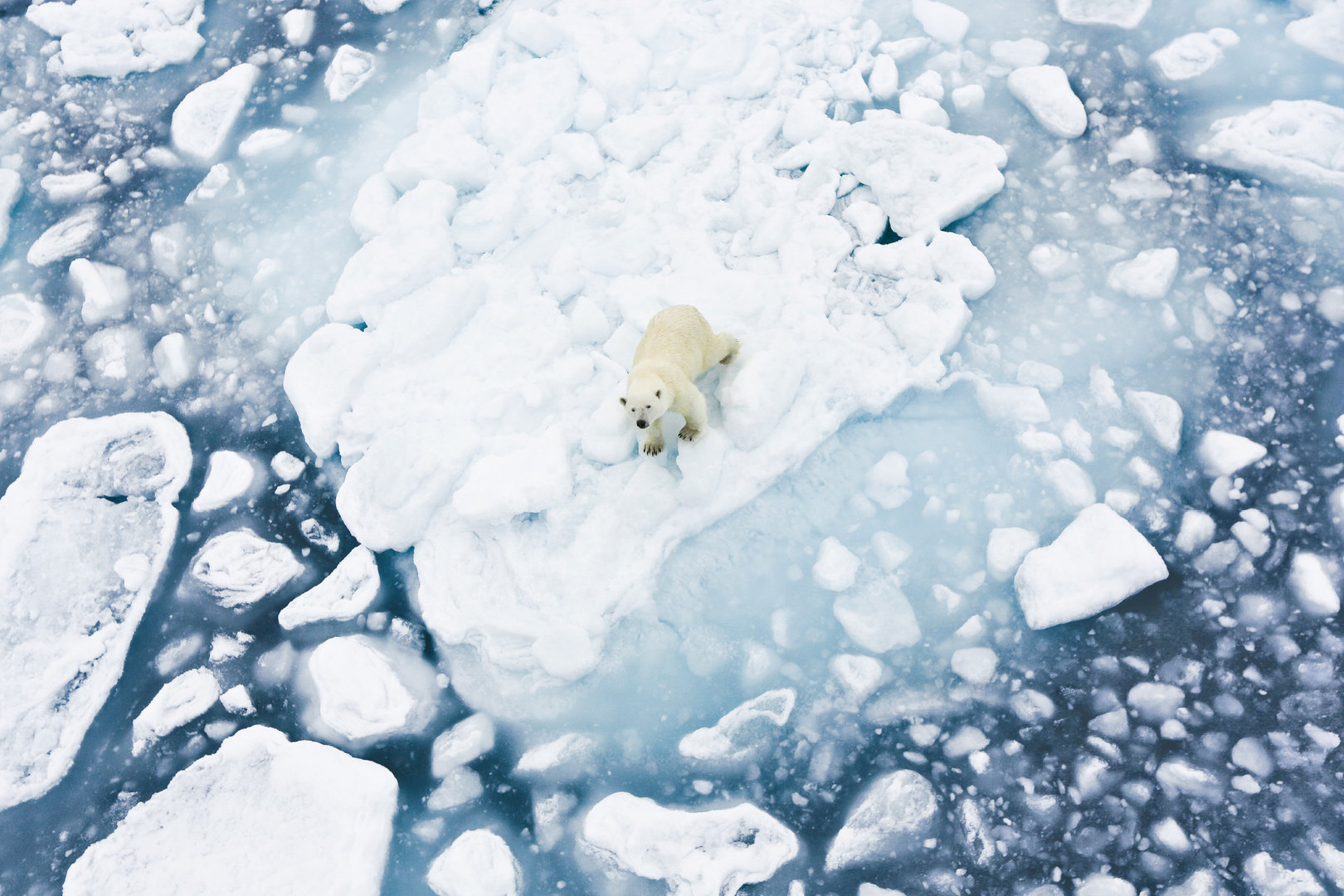 At first glance perhaps. The water that we can see here should, in fact, be a thick layer of ice. People wishing to counteract this and other consequences of man-made climate change must do something. We are showing how. By becoming actively involved and showing long-term commitment at all possible levels.

For a long time, discussions on curbing climate change focused entirely on energy and transport. The EU’s Green Deal has finally taken into account just how much the achievement of their plan, namely for Europe to be climate neutral by 2050, relies on the circular economy. Also – and precisely because – we are particularly good at reducing our emissions. Greenhouse gas (GHG) emissions caused by the circular economy were slashed by 70% between 1990 and 2010. The Federal Ministry for the Environment believes this figure will have reached 91% by 2030. As a comparison: emissions of climate-damaging gases in Germany as a whole fell by just 27% between 1990 and 2014.1  What makes the role of the circular economy so important, however, is that it has a positive impact on practically all other climate-relevant sectors.

How we help others to protect the climate

The circular economy’s contribution: alternative fuels, recycling solutions in the area of e-mobility

REMONDIS in particular, and the circular economy in general, have always been very aware of both their role and their responsibilities when it comes to taking action to curb climate change. We have been campaigning for decades now to make both politicians and the general public more aware of subjects such as conserving natural resources and cutting GHG emissions. The fact of the matter is that the effectiveness of the circular economy does not lie in our hands alone. Even the most innovative recycling technologies cannot develop their full climate protection potential, if a lack of political guidelines means that there are no customers for the recycled raw materials or that recyclable materials fail to make it to recycling facilities because of inadequate collection schemes. Which is why we see it as one of our tasks to make children and teenagers more aware of this subject and to show them how to handle recyclable materials responsibly. Over ten years ago, we launched our award-winning educational programme THE RECYCLING PROFESSIONALS to do just this.

For years now, we have been calling for a Europe-wide implementation of the TASi, a German law that bans organic waste materials from being sent to landfill anywhere in the country. Such a move would reduce emissions caused by the European circular economy by two-thirds in one fell swoop.2 The reason why this measure would be so extraordinarily effective: landfills containing organic waste primarily emit methane – a greenhouse gas that is 25 times more damaging than CO2! But there are other reasons besides the TASi that demand that the subject of landfills be put on the climate action agenda. There are millions and millions of rubbish tips all around the world where waste is simply being dumped and left exposed to the elements. There are very few other circumstances that have a more damaging effect on our climate. The waste at these sites is often burned on bonfires – something that not only releases greenhouse gases into the atmosphere but also toxins, endangering the lives of the local inhabitants.

The study What a Waste 2.0 concludes that 33% of all waste that is sent to landfill or incinerated across the world could actually be recycled.

If the climate goals are to be achieved, then it is essential that we not only switch from fossil fuels to renewables but also from virgin raw materials to recycled raw materials. Nowhere is this clearer than in the Ecodesign Directive, in which the subject of raw material efficiency plays no role whatsoever despite it being so very relevant. Being a representative of the circular economy, we are calling for this situation to be improved and for the Ecodesign Directive to be extended. Based on the well-known system used for depicting energy efficiency and labelling food, we have developed a raw material efficiency label that can be used on all types of product. This label provides information about how recyclable an article is and how much recycled material was used to make it. This helps consumers decide how sustainable a product is and producers are given the opportunity to document their commitment to promoting ecodesign.

What the recycling label communicates

How long is this product’s lifespan, functional life and service life?

What resources were used to make this product?

How recyclable is this product?

What is its carbon footprint?

The fight against climate change is also a fight for a greater acceptance of recycled raw materials among manufacturers. As far as climate action is concerned, it is of little help to have the circular economy recover large volumes of raw materials, if these are then not systematically used to manufacture new products. This is precisely the situation that we are facing at the moment. At present, just 15% of the input materials deployed by manufacturers are recyclates3. Which means 85% are virgin raw materials, which have a far worse record as far as conserving natural resources and reducing carbon emissions are concerned. There is a huge potential here to help curb climate change – potential that is being wasted unnecessarily and on a grand scale. We believe there is an urgent need for recycled content mandates in order to bring an end to this situation. What’s more, the amount of minimum recycled content should be gradually increased over the coming years. Minimum recycled content not only ensures that CO2 emissions are reduced. It also acts as a catalyst on the circular economy: the more recyclate that is used, the greater and more stable the demand for the material will be. This, in turn, gives the circular economy the confidence it needs to plan ahead and invest in new and better recycling technologies.

The enormously energy-intensive steel industry is one of the biggest carbon emitters around. And so, with the EU's climate goals in mind, it is no surprise that the industry is working flat out to become more climate friendly. Many are talking about achieving this by using green hydrogen to power their plants. The only problem here: it will take years before there is enough green hydrogen available to cover their requirements. Which means faster solutions are needed. One such solution is to focus on the materials steelmakers use rather than on their energy and has been put forward by the circular economy. By REMONDIS' company TSR to be precise, a business specialising in metal recycling. It transforms scrap steel into a recycled product called TSR 40. Its advantage over normal scrap steel: TSR 40 is of such a high quality that a far greater amount of it can be used to produce steel. 25% and more instead of the 15% that is normally the case. And if you take into account that every tonne of scrap steel used reduces CO2 emissions by up to 4.3 tonnes, it very quickly becomes clear just what a big step forward this is towards achieving green steel.

implement a Europe-wide landfill ban for organic waste and, over the medium term, a ban on uncontrolled landfills

Drop us a line

REMONDIS is one of the world’s leading recycling, service and water companies. Sustainability and climate action are not only the focus of our business, they are also an incentive for us to do more. At all levels – from recovering raw materials all the way through to generating climate-friendly energy.
remondis.de